How do you solve a murder when you only remember yesterday? 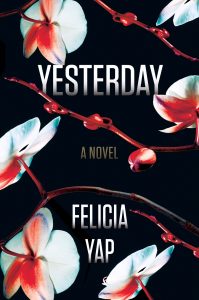 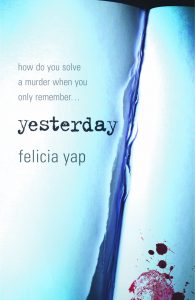 Imagine a world in which classes are divided not by wealth or religion but by how much each group can remember. Monos, the majority, have only one day’s worth of memory; elite Duos have two. In this stratified society, where Monos are excluded from holding high office and demanding jobs, Claire and Mark are a rare mixed marriage. Clare is a conscientious Mono housewife, Mark a novelist-turned-politician Duo on the rise. They are a shining example of a new vision of tolerance and equality—until…

…a beautiful woman is found dead, her body dumped in England’s River Cam. The woman is Mark’s mistress, and he is the prime suspect in her murder. The detective investigating the case has secrets of his own. So did the victim. And when both the investigator’s and the suspect’s memories are constantly erased—how can anyone learn the truth?

Told from four different perspectives, that of Mark, Claire, the detective on the case, and the victim—Yesterday races against an ever-resetting clock to find the killer. With the science-fiction world-building of Philip K. Dick and the twisted ingenuity of Memento, it’s a thriller you’ll never forget.

“A great murder mystery with a unique and unsettling twist. This book delighted and confounded me in equal measure!”—James Oswald

“Never has psychological crime fiction been so original, so witty and so inventive. This is an absolute firecracker of a read. I haven’t enjoyed a debut this much in ages.”—William Shaw

“The piecing together of disparate memories and the surprise ending to this speculative-fiction world will thrill mystery fans.”—Lucy Lockley, Booklist

“First novelist Yap has built an immersive, compelling and terrifying world where the only truth people know is what they choose to tell themselves. For readers seeking a new spin on the unreliable narrator or fans of stories of self-deception such as Dan Chaon’s Ill Will or E. Lockhart’s We Were Liars.”— Portia Kapraun, Library Journal (starred review)

“Terrific to find a book that can be classed as a crime thriller yet stand out from the crowd.”—Alex Gray

“At once a high-concept thriller with a sci-fi premise and an old-school noir, Felicia Yap’s Yesterday is a tasty, satisfyingly grounded blend. A rich, rewarding debut that shows the ways that memory can betray us as painfully – and perhaps as inevitably – as those we love.”—Andrew Pyper

“An intriguing, fast-paced thriller that captivated me right from the start.”—Kate Rhodes

“[Yap’s] a smart, swift plotter, and ‘Yesterday’ races along like it’s late for dinner. And her characters, particularly the detective and sad, lonely Claire, come to life on the page.”—Moira Macdonald, The Seattle Times

“A massively clever thriller that investigates our notions of memory and identity.”—Richard Skinner

“The most original thriller you’ll read this year! A page turner with a twist you’ll never forget.” —James Law

“I burned through Yesterday. With this punchy debut, Felicia Yap has hit on a winning formula from the very start. This is a book that will keep you guessing to the very end.”—Matthew Blakstad

“Felicia Yap takes a unique premise and rockets through this year’s most clever storyline.  Spectacular twists, characters as distinct as they are compelling, and a resolution absolutely no one will have seen coming make Yesterday propulsive read. Memory loss has never been so fun.”—Mike Cooper

“When it comes to memories, what do we choose to forget? To believe? Felicia Yap looks at these questions in Yesterday, an inventive, engrossing old-school murder mystery wrapped in a futuristic setting with a side of compelling love story and a killer twist at the end. Clever, unconventional, fast-paced, and above all engaging, Yesterday is a book to remember.”—Twist Phelan

“Felicia Yap’s Yesterday is a story about the vulnerability of memory and how the past always returns to haunt us. An exhilarating revenge thriller, equal parts suspense and philosophical science fiction.”—Hannah Lillith Assadi

“Yesterday is an inventive, wicked thriller with an addictive puzzle-box narrative. Every time I thought I had it figured out, Felicia Yap hits me with another twist.”—Rob Hart

“Yap is venturing into new genre territory — dare I call it a neuro-sci-fi thriller? An ambitious and fascinating twist on the throwback detective story, where we can’t guess who is the killer and who is the victim… and memory itself is on trial.”— Sandra Block